The Siegfried-class dreadnought was originally another attempt in Starfleet's on-going quest to develop an "ultimate starship beam weapon" capable of breaking through shields and destroying enemy ships with a single volley. The Belleau Wood class's transfer of most ship facilities to the primary hull was seen as an opportunity to mount an extremely powerful beam weapon in the secondary hull. Such a beam weapon, code-named Kaminari (Japanese for "thunderbolt") had been under development by Starfleet since 2223. All that was needed was a suitable hull to carry it. Design work on modifications to the Belleau Wood class hull began at Starfleet's Western NorAm Engineering Center at El Segundo in 2230. The new ship was to enter service in 2233. 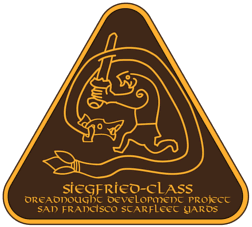 As originally designed, the Siegfried-class dreadnought was to use a slightly modified Belleau Wood-class primary hull and a shortened secondary hull housing the primary beam weapon. Excluding the power feed for the primary weapon, relatively few changes were envisioned for the warp power assembly and twin nacelles from Belleau Wood, because the weapon could not be fired while the ship was traveling at warp speeds. Most crew and command facilities, storage bays, and machinery were relocated to the primary hull. Because the primary weapon was to be mounted at the front of the secondary hull, the main navigational deflector was remounted at the front of the primary hull. An auxiliary deflector was placed at the rear of the hull. The main shuttlecraft bay was then moved from the fantail of the secondary hull to divided locations in the port and starboard aft quarters of the primary hull. To allow the Siegfried to have sublight performance equal to or better than that of other Starfleet or hostile cruisers, dual impulse decks were installed at the rear of the primary hull.

As modifications were made to the Belleau Wood hulls, work on the Kaminari beam weapon was proceeding smoothly beneath the surface of Charon at the Starfleet Combined Weapons Research Laboratory (SCWRL), known for obvious reasons as the "Squirrel's Nest." Unlike other phasers in service before 2271 which had to accumulate energy from fusion reactors in rechargeable banks before firing, this "superphaser" weapon was to receive, convert, and discharge power directly from the matter/antimatter (M/AM) reactor. Theoretically, this would allow greater on-target energy delivery and higher rates of fire. Because submaximal bench tests had so far been completely successful, in late 2231 the decision was made to proceed immediately to full-power field tests.

Tragically, the initial field test of the Kaminari weapon on October 21, 2231, was a disaster. Held at the Pluto/Charon Starfleet Weapons Range and attended by numerous dignitaries from Starfleet and the Federation Council, the test was delayed for several hours because of targeting-system interface problems. After the delay, several submaximal discharges were successful. When the weapon was finally discharged at maximal output, a massive explosion occurred. The testbed ship (ex-USS Whittle [NCC-1227, Lancaster class], which had been retired after being severely damaged by a collision with USS Lilienthal [NCC-533, Gagarin class] at Starbase 29) was completely destroyed and her crew of 22 were killed. The viewing station was showered with debris: 17 spectators and technicians were injured and 9, including Commodore Shrev of Andor (Chief of Starfleet Research and Development) and Victoria Miho Chatterjee (Second Vice President of the Federation Council) were killed. As the weapon was still classified "top secret," the true nature of the accident was not publicly revealed until 2250.

An investigation into the cause of the accident found that the positron reflux preinitiator assembly, a "criticality 1" component, had failed owing to damage during its installation. Although "criticality 1" indicates that the failure of the component could lead to loss of the entire ship, the possibility of malfunction had been considered negligible and redundancy was therefore zero. For the next 20 months, engineers at the Squirrel's Nest labored to completely reconfigure Kaminari. The redesigned weapon, designated Kaminari II, was 84% heavier and 44% longer than Kaminari I. Field tests, again at the Pluto/Charon Range, were successful and uneventful. Further testing against shielded targets showed that Kaminari was able to easily destroy ships with a shield dissipation rate of less than 110 GW, which was believed to exceed anything in the present Klingon or Romulan fleets. However, because of more rapid beam dispersion, Kaminari II could achieve this level of effectiveness only at ranges 33% less than that of standard phasers.

With the redesigned Kaminari II, the projected displacement of the completed ship with two warp nacelles had increased to more than 180,000 tons, approximately 50% more than Valley Forge. To allow Siegfried to achieve satisfactory warp speeds with this increased weight, a third nacelle was mounted on the centerline above the connecting dorsal. Although the total displacement was now some 200,000 t, the per-nacelle displacement was approximately 67,000 t, which was comparable to that of Valley Forge. To power the three nacelles and the primary weapon, a larger, more powerful warp reactor was used. 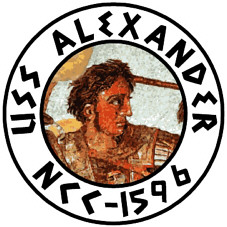 Finally, on November 5, 2234, the components of the redesigned ship were assembled at the San Francisco Starfleet Yards. The lead ship of the class, USS Siegfried (NCC-1589), joined the fleet in December 2235, nearly two years behind schedule.

Unfortunately, Siegfried had several shortcomings as an antistarship weapon system. First, targeting was rather difficult. Because of its length, the weapon had a limited field of fire without turning the entire ship. This method of aiming had rarely been used since the days of winged atmospheric fighter craft that fired simple, unguided metal slugs propelled by chemical explosives. Despite a second impulse deck, the ship handled poorly at sublight speeds ("like a Rigellian scaly mole pig" in the words of one helmsman) because of the added weight of the third nacelle. Second, because of the overheating of internal capacitance elements, the Kaminari II's rate of fire was low, approximately six full-power discharges per minute. Third, because of the relatively short range of the primary weapon, in combat Siegfried would be forced to accept phaser fire until it could close with the enemy and return fire. As a result, more robust forward deflector shielding, both physical and energetic, was required. 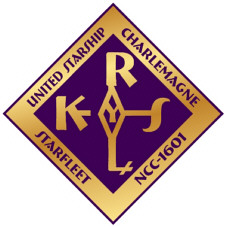 Because of the problems stemming from its primary weapon, Siegfried had become an extremely costly ship. Siegfried had been intended to be a relatively inexpensive development of the Belleau Wood design, using the same primary hull and warp power train. However, because of the failure of Kaminari I, fully 63% of the ship's systems were new. In fact, an audit by the Starfleet General Accounting Office determined that designing a new ship from the keel up would have been considerably faster and cheaper. Furthermore, some 6,000 man-hours per week (out of a total of nearly 20,000 available under normal duty conditions for a crew of 350) were required to maintain the primary weapon and related systems even if it was not fired. Because of these enormous manpower requirements and relatively poor facilities for research, Siegfried was only suited for combat, and in limited roles. As a result, only 14 ships of the planned class of 25 were built.

However, Siegfried was found to be an extremely effective weapons system under certain conditions. In the famous combined fleet exercises of 2237 at Wolf 359 (which at that time was an obscure dwarf star), the offensive Blue Team, which included four Siegfried-class ships (USS Siegfried, Hercules, Lysander, and Perseus) and three Belleau Wood-class assault cruisers (USS Clavius, Veracruz, and Hellas Planitia), achieved its objective of landing troops by shuttlecraft on the system's fourth planet against the defending Red Team, comprising mostly Valley Forge-class and Kestrel-class ships.

The postexercise analysis determined that Siegfried-class ships were effective shock weapons against targets of limited maneuverability, such as space stations, surface installations, and ships defending a planet or comprising a large formation, or when they were protected by escorts and destroyers. However, in action against a smaller number of freely maneuverable ships, Siegfried ships were at a decided disadvantage and a possible strategic liability unless the opposing vessels were as large and slow as themselves. Luckily, contemporary Klingon heavy cruisers, such as those of the D4 and D5 classes, were even more poorly maneuverable.

By the early 2240s the limited operational applicability of the Siegfried class kept most ships close to port. Their relatively poor scientific facilities prevented them from performing the survey and surveillance missions usually performed by heavy cruisers. However, whenever Starfleet had to threaten or use overwhelming force against relatively immobile targets, Siegfried ships were quite advantageous. For example, preceding landings at Lisyk VIII in 2239 and at Corf I in 2243, Siegfried-class ships were used to overwhelm planetary deflector shields through concentrated orbital barrage. In 2244, USS Perseus (NCC-1592) and USS Musashi (NCC-1600) silenced a Klingon battlestation built from a hollowed-out asteroid in the Ganatil system after four hours of sustained fire. However, both ships were severely damaged and sustained extremely heavy casualties.

As mentioned earlier, starship designers have periodically toyed with the idea of cruisers with a single "big gun." Several classes of dedicated gunships were operated quite effectively by the United Earth Stellar Navy during the Romulan War; however, the Romulan forces of the time were technologically far inferior to Earth forces. Since that time, such designs have rarely left the drawing board and, if built, have rarely been successful. After the failure of the Siegfried and the Kaminari II weapon, no "big gun" cruisers were considered until the Borg threat of the late 2360s.

The Siegfried class received a new lease on life after 8 of the 12 surviving ships were converted to standard heavy cruisers when introduction of the new Constitution class was delayed from 2242 to 2245. The Kaminari II weapon was removed and the ship's battery was changed to a standard mix of phasers and photon torpedoes. The forward navigational deflector was moved from the primary hull to in its usual position in the secondary hull; however, the aft deflector was retained. Several of these refitted Siegfried-class ships saw action at the Battle of Axanar in 2250. In this new configuration, Siegfried ships performed missions similar to those of the newer Constitution-class ships until their retirement in the 2280s.

The Siegfried-class dreadnought USS Alexander (NCC-1596), a participant in numerous engagements along the Klingon frontier, has been restored to her original Kaminari II configuration and is on display at the Starfleet Museum.