Perhaps more than any other class, the Archer class of system patrol ships were responsible for saving the outer colonies of the United Earth (UE) during the perilous early months of the Earth-Romulan War. These tiny ships were often all that stood between the mighty Romulan war machine and thousands of colonists on the planets within striking range of the Romulan Empire.

Archer was designed in the early 2150s to serve as a semiautonomous intrasystem patrol vessel for protecting colonies and performing police actions against raiders and pirates. The UE Stellar Navy (UESN), whose strength at that time was still at its extremely low prewar levels, had barely enough ships to patrol the major space lanes and protect UE core worlds, much less to defend colony worlds at the far reaches of its territory. The UE frontiers were simply too vast to be reliably protected by the UESN's lumbering interstellar cruisers, such as those of the Alexander class, which could barely make wf 2.3. To provide for colonial defense, Archer-class ships were to be based singly or in pairs at each border system, where they would operate under nominal local control. Unlike larger UESN cruisers, the 62-m-long Archer carried only a small, high pressure 6N-4A fusion reactor, a single Firefly inline warp nacelle, and a small supply of deuterium. This drive system allowed Archer to respond at moderately high warp speeds (wf 2.7) to trouble within 500 au of its base but not to travel to other star systems. 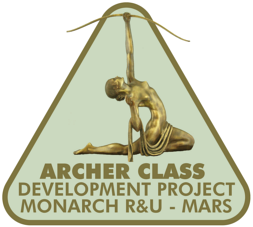 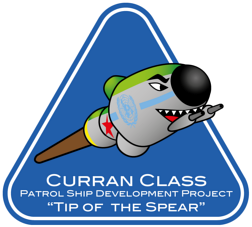 All Archer-class ships were all built at the Monarch R&U Shipyards in orbit around Mars and were transported to their bases 4 at a time by specially modified Bison cargo ships similar to the later Yorktown-class carriers. These small ships could be based in orbit around colony worlds, at asteroids or space stations, or even at tenders far from any planetary body. Archer required little maintenance (a support team of 30 was standard) to be kept in a constant state of readiness and could be launched on a mission with its crew of 20 in as little as 15 minutes. Because of their relatively modest drive systems, Archers had more room available for sensor and targeting systems, lasers, and missiles than did interstellar ships of similar displacement.

The lead ship of the class, UES Archer (PC-59) was launched in the summer of 2154, just as the Romulan threat was finally being publicly revealed. In view of this threat, the initial order of 25 ships, which was believed adequate in peacetime, was immediately doubled. Through 2157 some 73 Archers entered service with the UESN. Even before the formal declaration of hostilities between the UE and the Romulan Star Empire in March 2156, Archer-class ships had already begun countering incursions by Romulan raiders and scoutships. For example, in May 2155 an anomalous energy signature was detected by orbital sensors near the UE's Utopia colony at 61 Virginis. The single Archer based there, UES Suri (PC-74), was sent out to investigate and soon detected faint sensor traces suggesting the presence of a small, stealthed Romulan ship. The two vessels played a desperate game of cat and mouse for 3 days before the intruder was destroyed.

In the valiant but unsuccessful defense of Deep Space Stations Yu-lei and Shen-shu in the war's opening action, the First Battle of Hell's Gate, 3 remotely piloted Archer-class ships, UES Leyton (PC-61), UES Winstead (PC-72), and UES King (PC-78) rammed and destroyed 3 Cabbages. Two manned Archers, UES McKeggan, (PC-75) and UES Castillo (PC-80), managed to destroy a further Cabbage apiece. Amazingly, 54 of the UESN crew who volunteered to remain in-system and fight aboard Archers and at surface installations survived the Romulan attacks by hiding aboard these Archers in the systems' asteroid belts. They were rescued when a UESN relief force recaptured the systems in the Second Battle of Hell's Gate the following year. (See the Cabbage article for a detailed account of the battle.)

Archers did much to blunt Romulan thrusts in the desperate days following the attacks on Yu-lei and Shen-shu. In the first 4 months of the war Archers were credited with the destruction of some 25 Romulan ships, including 6 half-million-ton Cabbage-class cruisers. In June 2156 2 Cabbage and 3 smaller Elbow-class cruisers attacked the Utopia colony. The 4 Archers based there—UES Pemberton (PC-60), UES Haar (PC-66), UES Suri (PC-74), and UES Hachez (PC-92) and 1 San Francisco-class corvette (UES Taipei, CL-73)—engaged the attackers near the system's Kuiper belt. Four of the Romulan ships were destroyed (including 1 destroyed in a suicide attack by UES Hachez), and the fifth escaped back across the frontier.

With the introduction of shipboard matter/antimatter (M/AM) power systems in 2158, the UESN launched an improved version of Archer, designated the Curran class. Although outwardly resembling Archer, Curran, which was also constructed by Monarch R&U, was powered by M/AM fuel cells similar to those carried by the famous Minotaur fighters. However, unlike Minotaur, Curran did not carry a fusion reactor capable of creating and sustaining a warp field for interstellar flight. Minotaurs were usually carried internally at warp speeds by Yorktown-class carriers and released deep within enemy territory. After attacking a target within 300 au of its release point, the Minotaur would rendezvous with the Yorktown and be carried back to UE space. However, if a Minotaur were unable to rendezvous with the carrier or if the carrier were destroyed, the Minotaur could return to UE space at low warp speeds using its onboard fusion reactor. In contrast, Curran's fusion reactor was used only to power internal systems and the sublight impulse drive; warp drive was powered only by fuel modules. Within these replaceable modules, 10 of which were carried by Curran, matter and antimatter were stored, then reacted at narrowly controlled rates. However, because Curran was never expected to cross interstellar distances under their own power, a large fusion reactor was unnecessary. This weight savings allowed Curran to mount more powerful sensors with which to detect attacking ships. They could also achieve higher peak speeds (wf 4.6) than could Minotaur or Archer for intercepting enemy ships and making attack runs.

In the last 2 years of the war, 30 Currans entered service with the UESN. Although Curran was a more powerful attack ship than either Minotaur or Archer, it did not achieve the fame of either of these ships because by the time it was introduced the tide of the war had turned in the UE's favor. In the latter half of 2158, UESN task forces, spearheaded by powerful second- and third-generation M/AM-reactor-equipped cruisers and carriers, had begun their drive towards the Romulan homeworlds. Although the UE's outer colonies were still under threat of Romulan attack until early 2160, by 2159 the Romulans had begun to withdraw from their most forward bases and to consolidate their defensive sphere around their core worlds. Thereafter, Romulan forces made only occasional nuisance raids against the UE's outer colonies, which were now much more heavily defended than in the early years of the war.

Archer and Curran were purely defensive patrol craft that took no part in the great UESN offensives of the last 2 years of the war. However, by defending the outer worlds of the UE against Romulan attacks in the war's early years, they saved the lives of thousands of UE citizens and held the line until the UESN was itself ready to go on the offensive.

The Archer-class UES DelCampo (PC-76) and the Curran-class UES Sullivan (PC-146) are on display at the Starfleet Museum.