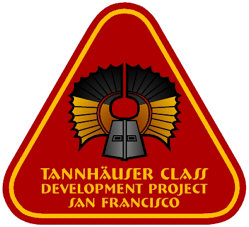 When the first matter/antimatter (M/AM) starship reactors were finally certified in March 2157, several classes of fusion-powered ships had already been designed to use them. The first class to appear, in April 2157, was the Krechet class, developed from the fusion-powered Amarillo class. Derivatives of Bison-class hulls soon followed. The first was the Tannhäuser-class heavy cruisers (CHM-55), which entered service only one month after Krechet.

The Tannhäuser cruisers were essentially lengthened Pioneer-class ships adapted to use the new SSWR-III-A reactor, which had been designed for ships with displacements greater than 300,000 tons. As with Krechet, the smaller amount of deuterium that needed to be carried allowed a larger payload, including both offensive and defensive weaponry and more powerful sensors and deflectors. An unusual feature of Tannhäuser was the extreme forward placement of the directional nacelles in a "hammerhead" arrangement, which was done in an attempt to increase maneuverability at warp speeds.

UES Tannhäuser and her sister ships UES Vicksburg (CHM-57) and UES Marathon (CHM-60) joined the fleet in May 2157, just in time to take part in the Battle of the Vela Gap in October 2157. This battle was instrumental in proving the usefulness of M/AM-powered ships. However, Tannhäuser was an interim design that did not fully realize the potential of an M/AM-powered warship. Although 14 ships of the class joined the fleet, they were quickly superseded by the Conqueror-class heavy cruiser. All Tannhäuser-class ships were decommissioned at the end of the war.

The Tannhäuser-class heavy cruiser UES Hastings (CHM-58), a veteran of the Second Battle of Hell's Gate, is on display at the Starfleet Museum.