At the start of the war, the Admiralty recognized a need for a large number of small, fast ships to patrol the extensive frontier areas between United Earth (UE) and Romulan space. Although a system of automated sentry buoys was in service, automated sentries can never act with the judgement and flexibility of manned ships. Furthermore, these robot sentries could not take any defensive actions against border violations as it was thought unwise to give them any weaponry. They were only able to fire a warp message torpedo towards the nearest starbase. Such sentry buoys had been placed at the point where the Romulan invasion fleet crossed into UE space in September 2157, but they apparently had been destroyed or incapacitated before they could send any warning. 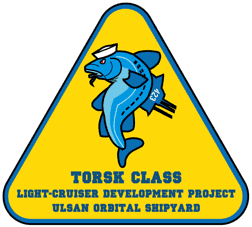 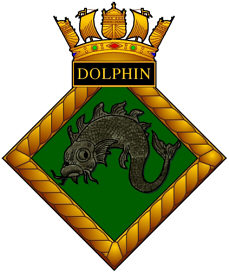 The Torsk-class cruisers (CEM-1) were designed with two distinct missions in mind: to gather intelligence along border areas and to hunt and destroy enemy scoutships. Torsk was the first to carry the improved SSWR-II-C warp reactor, which was 30% smaller but only 5% less powerful than the SSWR-II-B carried by the Krechet class. Because of the narrowly-defined roles Torsks were to play, they were much less expensive to build and operate than were Krechets. They carried fewer weapons, had a 35% smaller crew, and were 25% lighter despite having two main warp nacelles to Krechet's one. Fourteen Torsk-class cruisers entered service from February through December 2158. However, they saw little action in their intended roles as Romulan forces withdrew and consolidated in anticipation of a UE offensive. Instead, they were used as sensor pickets and scouts when UE Stellar Navy task forces pushed into Romulan territories in the final 2 years of the war. Torsks did well in these limited roles, but were eventually superseded by the significantly more capable Powhatan class.

The Torsk-class escort UES Stingray (CEM-6) is on display at the Starfleet Museum.