In the aftermath of the Battle of the Vela Gap in September 2157, the United Earth (UE) resolved to launch an offensive into Romulan-held space. However, the United Earth Stellar Navy (UESN) had never undertaken an invasion of such magnitude in its 80-year history. To spearhead the attack on enemy worlds, a number of new ships were needed. The Farragut-class fleet monitors (FMM-1) were designed as a platform to mount heavy fire support for bombardment of ground-based targets from high planetary orbit. 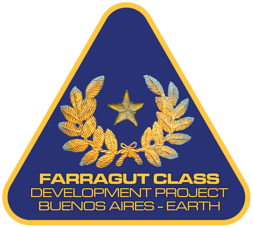 Like many other heavy warships, Farragut was based on the reliable Bison design. The ventral forehull was modified to carry accommodate a drop bay for Grand Slam orbit-to-ground attack missiles. Unlike ship-to-ship missiles, where speed and maneuverability were key, ground attack missiles were slow, but optimized for descent through a planetary atmosphere. These missiles were especially designed to take out hardened surface and subsurface installations to soften resistance prior to landing. Farragut also carried an Ultra Zeus orbit-to-ground pulse laser mounted in a ball turret, for intercepting missiles launched from the planetary surface. Finally, because it would always be escorted by Krechet- or Tannhäuser-class cruisers, Farragut carried only a small complement of defensive missiles for space combat.

However, no Farragut-class ships ever saw action in their intended roles; the projected troop landings on Romulan-held worlds never took place. The Romulans fought so ferociously to defend their planetary holdings that a direct orbital assault was usually impossible. Instead, most task forces had to resort to stand-off bombardment of a Romulan planet, a much more destructive and time-consuming operation. In other assaults, the Romulan bases would self-destruct by detonating their fusion reactors rather than succumb to enemy occupation.

Farragut also suffered from more rapid obsolescence. Because of its nature as a planetary assault ship, Farragut was considered a front-line vessel, and deployed accordingly. However, its SSWR-III-C reactor, state-of-the-art when first launched in May 2158, was quickly outperformed by the newer SSWR-III-D launched in Conqueror-class heavy cruisers in early 2159. Fleet commanders found that Farraguts could not keep up with their own escorts, requiring task forces to cruise at slower speeds to their targets. As a result, only nine Farragut-class ships were built, out of a planned twenty. The remaining hulls, already under construction, were converted into Olympus Mons-class transports instead.

One ship, UES Hartford (FMM-3), was converted to a cargo transport after it was decommissioned in December 2160. It had a long career as part of the Federation Colonial Command and commercial services. It has been restored to its wartime service appearance, and is on display at the Starfleet Museum.