Mobile subspace transmitters represented a revolutionary leap in interstellar communications. Even before the United Earth Stellar Navy (UESN) transitioned from a defensive war to an offensive war, timely and reliable communications between frontier units and fleet commanders was essential. After its launch in 2157, the Marconi-class subspace communications cruiser (ACSM-6) played a vital role in the offensives into Romulan-held space. These ships were made possible by the pioneering but flawed Baikal class of the late 2140s.

Early Faster-Than-Light Communications
Although faster-than-light (FTL) starships had, by 2154, been used by Earth for nearly a century, sending messages at similar speeds was a different matter. Early subspace transmitters, which were first deployed in the 2110s, were extremely large: the transmitter generator had volumes of more than 60,000 m^3, and transmitter dishes spanned 200 m or more. Power requirements were correspondingly enormous to send a message over interstellar distances. As a result, a mobile subspace transmitter remained impractical for all but the shortest-range transmissions. (For a more detailed treatment of the early development of subspace transmitters, see the article on the Hyperion class.) In contrast, the equipment needed to receive a subspace message was small enough to be easily mounted on most warp-capable starships.

Because starships could receive messages transmitted from Earth or another base but could not respond in kind, an alternate method of FTL communication was required. The most practical method for sending ship-to-ship and ship-to-shore messages was the warp message torpedo. These small, unmanned craft, typically about 5 m long, had a maximum speed of wf 5 and a range of 10 ly. (Although traditional radio, limited to light speed, was useless for long-range communications, most ships, even today, still carry equipment for transmitting radio signals, primarily for emergencies and for ranges of less than 2 au.)

Warp message torpedoes provided an acceptable, if less than ideal, solution to the problem of rapid interstellar communication. Messages could be delivered in a matter of weeks instead of months or years and at far less expense than dispatching a fully equipped starship. Both inside and beyond United Earth (UE) territory, information was routinely relayed between ships and from ship to shore.

However, the outbreak of the Earth-Romulan War exposed several critical flaws in the message torpedo system. First, torpedoes could not deliver intelligence on Romulan movements in a timely manner. To defend UE colonies, UESN commanders needed to be informed of the location, strength, and movements of the Romulan fleet. If a UESN warship patrolling the frontier detected an enemy ship, its captain would dispatch a message torpedo to its command base before engaging the enemy. In most cases, the engagement would be long over by the time the message reached the command base. Depending on the size of the enemy force, the fleet commander would be forced to dispatch additional ships without knowing the outcome of the patrol ship's initial encounter.

A second, related drawback to the message torpedo system in wartime was the difference in time needed for ships on patrol to receive messages from base and for the base to receive messages from the ships. Command bases would send out orders by subspace to warships that were no longer on their patrol stations or that had been destroyed by the Romulans. Sometimes these orders were already obsolete, if the frontier units had obtained more recent or detailed information. Thus, UESN captains were necessarily granted broad authority to interpret their orders as the situation dictated. However, this independence also made it difficult to coordinate a unified defense against the Romulan invasion.

The third, and potentially most dangerous, flaw was the potential for messages to be intercepted by the enemy. Although message torpedoes were guided by an onboard computer system, they were incapable of elaborate evasive action due to their small size and the limited fuel supply. If a message torpedo were intercepted by a Romulan warship, the torpedo would automatically self-destruct.

However, interception or self-destruction meant that the information the torpedo carried would not reach its intended recipient. To increase the chances of a vital message evading any enemy forces, a warship commander could launch multiple message torpedoes along different routes back to base.

Finally, a warship could only carry a limited quantity of message torpedoes. A warship could quickly exhaust its supply during a combat mission when messages were dispatched rapidly or to multiple coordinating ships.

Introduction of Mobile Subspace Transmitters
The first starship to be equipped with a subspace transmitter was UES Baikal (ACS-1) in 2146, a Bison-class transport modified to carry a short-range subspace transmitter. The equipment took up approximately 25,000 m^3 of internal volume and required a 120-m-diameter antenna to be mounted on the ventral hull. The subspace transmitter drew its power from the main fusion reactor, but required so much power that it could not be active while the ship was traveling at warp. Despite the flaws of this platform, by 2150 subspace transmitters had been fitted to 4 more Bison transports, designated the Baikal class. 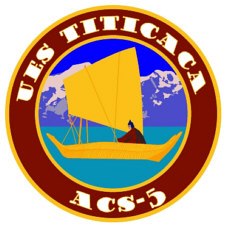 Most of these early mobile transmitters were operated by the United Earth Space Probe Agency (UESPA), which performed survey and exploratory missions up to 10 ly beyond the UE's borders. Because these missions often took place beyond the range of message torpedoes (called the "red line" by survey crews), ships might be out of contact with their home base for months or years. However, an accompanying subspace transmitter ship could maintain constant contact with the UE. Furthermore, the subspace transmitter could also be used as an active sensor array to identify potential survey targets from a much greater distance than possible with conventional scanners. (Most long-range sensors of the era were passive due to the same limitations on FTL communications.)

A typical UESPA expedition in the early 2150s was led by a surveyor, which carried short-range sensors, science laboratories, and a large complement of atmospheric shuttles for ship-to-surface operation; accompanying the surveyor would be a deuterium tanker for refueling between star systems, a subspace transmitter ship, and occasionally a UESN escort cruiser. One notable expedition including a Baikal-class ship took place in 2155, when UES Tanganyika (ACS-3) participated in Earth's first contact with the Altair system.

Although the UESN expressed interest in mobile subspace transmitters, it decided not to order an entire class. The UESN considered the ships too expensive to operate in most theaters, where only peacetime patrols were conducted. The UESN did operate one ship, UES Titicaca (ACS-5), as a sensor picket to provide early warning against Orion pirates that were raiding commercial traffic near the Libra colonies.

However, everything changed when the Romulan War began in 2156. The 5 Baikal-class ships in service were reassigned to military operations along the border, where they served as command-and-control ships for patrol and defensive missions. The subspace transmitter was also employed as an active sensor array for detecting and attacking Romulan warships. However, because of the immense power demands of the transmitter, which required the ship to drop out of warp to transmit a message, Baikal-class ships were highly vulnerable to attack while the subspace transmitter was operating.

M/AM-Powered Subspace Transmitter Ships
The solution to the power problem was the matter/antimatter (M/AM) reactor. Unlike a fusion reactor, a M/AM reactor could generate more than enough power to supply all primary ship's systems, including the warp drive, as well as the subspace transmitter generator. 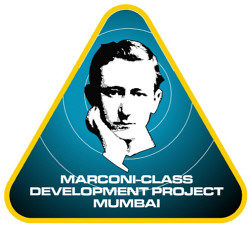 The reactor chosen for the new Marconi class was the SSWR-III-A M/AM reactor, which was destined for use in the Tannhäuser-class heavy cruiser as well. Although the SSWR-III-A was the most powerful mobile reactor in use by the UE at the time, its output was insufficient to power both the warp drive and the subspace transmitter at maximum levels simultaneously. Therefore, to transmit a subspace message at maximum power (and, therefore, speed and range), Marconi had to drop out of warp, and to travel at maximum speed the subspace transmitter generator could not be operated. For a given tactical situation, an appropriate compromise between the warp speed and transmission power was chosen by the ship's captain. 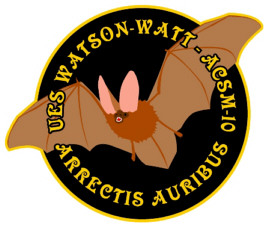 To simplify design and construction costs, the Marconi used the same basic hull form as the Tannhäuser-class heavy cruiser, which was also under development at the time. However, numerous changes had to be made: 3 of the 4 laser turrets were removed, as were all offensive missiles and their associated launchers. The Jaguar I directional nacelles were moved aft to the reactor hull, because maneuverability was not expected to be a priority. The subspace transmitter generator, with its accompanying equipment, was installed in the midsection of the forward hull, and the 100-m antenna mounted below.

Because of the utility of the communications systems, a new fleet command "overbridge" was installed as well. Whereas a normal bridge is primarily dedicated to ship's operations, the overbridge was a multitiered control room designed to rapidly collect and process intelligence gathered by the subspace array, and to facilitate the transmission of orders to other ships just as quickly. 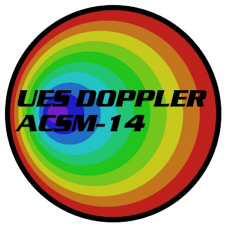 Service History
UES Marconi finished construction in July 2157, and was immediately rushed to the front lines. Although they arrived too late to participate in the Battle of the Vela Gap, Marconi-class ships are credited with the early detection and interception of 5 Romulan task forces in their first 6 months of service.

Marconi-class ships brought several immediate benefits to the battlespace. First, a Marconi could accompany a frontier patrol force (often led by an Amarillo- or Krechet-class cruiser), and provide continuous updates to the nearest command base concerning the force's location and disposition. When an enemy ship was detected, a warning could immediately be sent to all nearby ships by subspace. If reinforcements were needed, they could also be summoned much more rapidly.

As the UESN began to push into Romulan space in mid-2158, Marconi ships were also teamed up with the new Powhatan-class escort cruiser on hunter-killer missions. A "wolf pack" of 3 Powhatans would accompany a Marconi across the border into Romulan space, using the superior sensor capabilities of the Marconi to search for targets of opportunity. These missions, combined with the long-range precision attacks launched by Yorktown carriers and Minotaur fighters, did much to clear Romulan space in preparation for the coming UESN invasion.

Perhaps the most notable action involving a Marconi was the Battle of the Krakowski Void in June 2158, where timely intelligence on enemy movements relayed by subspace from UES Popov (ACSM-9) allowed an outnumbered UESN squadron to outmaneuver its Romulan opponents and destroy a staging area in Sector 19.

By early 2159, 8 Marconi-class ships had entered service. However, the Conqueror-class heavy cruisers were nearing completion as well. These new cruisers were capable of faster speeds (up to wf 4.1), thanks to the new SSWR-III-D M/AM reactor. To prevent the slower Marconis from becoming a tactical liability, the remaining 6 ships of the class were constructed with the same SSWR-III-D reactor and improved Jaguar Ia nacelles to allow them to keep pace with their escorts. Two of these "block 2" Marconi-class ships participated in the Battle of Cheron in 2160.

After the war, 10 Marconi-class ships were transferred to Starfleet. The 4 "block 1" ships transferred were upgraded with the newer reactors. Starfleet used the ships both for strategic mobile communications and for some long-range exploratory missions. However, as warp speeds continued to increase in the 2170s, Starfleet chose to order a replacement, the Lightning class, based on the Constellation-class transport. The last Marconi-class ship was retired in 2186.

There is no known surviving representative of the Baikal class. The Marconi-class communications cruiser UES Ørsted (ACSM-18), a veteran of the Battle of Cheron and the ship that negotiated the peace treaty with the Romulan Empire, is on display in the Starfleet Museum.