The Development of Subspace Communication
For much of Earth's recorded history, seagoing ships were the fastest and most secure means of long-range communication. Accordingly, issuing commands to a ship at sea usually required a message to be dispatched on yet another ship. With the development of radio and wireless telegraphy in the early 20th century, messages could be sent and received at the speed of light. However, when Humanity began to explore space beyond the earth's orbit, radio messages could only be received after delays that gradually increased from minutes to hours to days. When the light barrier was broken by Zefram Cochrane in 2063, ships were once again the fastest means of communication.

The dream of faster than light (FTL) communications came a step closer to reality in 2022 when physicists on Earth first confirmed the existence of the subspace domain. Subspace was found to provide an additional electromagnetic (EM) polarization plane perpendicular to the planes in normal space which could be used for signal transmission. Single particles were observed to tunnel into the subspace domain; however, all attempts in the next 20 years to transmit nonrandom signals through subspace failed. Although the physics behind subspace communication was gradually clarified during the 21st century, subspace communication would not become a reality for another 70 years.

In 2048, Zefram Cochrane and his team at the United States Combined Institute for Advanced Physics at Alamogordo, New Mexico, successfully established a low-frequency field transition into subspace. This accomplishment was part of Cochrane's attempt to develop a continuum-distortion drive; however, the field dispersal was far too great for signal transmission in subspace. Despite this promising start, the outbreak of World War III halted most research on FTL drives and communication. Immediately after the war, most governments were more concerned with rebuilding their shattered economies than with developing practical interstellar flight. However, in 2063 Cochrane, working with a small team that had sought refuge in the forests of Montana, made the first warp flight in Phoenix, whose booster stage was a converted American military rocket. Although Cochrane's flight revolutionized space travel and opened the galaxy to Human exploration and colonization, ship-to-shore and ship-to-ship communication would remain trapped behind the light-speed barrier for almost a century.

In 2071, a technological exchange with the Vulcans, who were working on a subspace communication system for their own fleet of science vessels, introduced Earth scientists to a new alloy (with the trade name Vulcanium) for use in subspace antenna coils which considerably increased signal fidelity, at least for frequencies in the kilohertz range. In 2094, the Siemens-Bell consortium built Argus, a 800-MW subspace transmitter/receiver, outside Berlin to provide real-time communication (or at least with acceptable delays) with spacecraft within the Sol system. By 2100, a network of such stations had been established throughout the solar system; by correlating the received signals the range of communications could be increased to 2 ly. Efforts in the following years focused on establishing a relay network between the major inhabited planets. Earth and Alpha Centauri I were linked in 2112, and Earth and Vulcan were linked in 2120. By 2132 this network of ground-based transmitters and deep-space signal boosters was completed and connected Earth with the Inner and Outer Colonies and with her allies Vulcan, Andor, and Tellar. These early subspace signals could travel at nearly wf 8, much faster than the ships of the time, which were barely capable of reaching wf 2. Interstellar communication was now possible in a matter of hours or days rather than years.

In the early 22nd century subspace transmitters and receivers were extremely large, required enormous amounts of power, and, accordingly, were extremely expensive to build and operate. The main reason for their large size was that the strength of the subspace signal decreased to a fraction of approximately 10^-16 (depending on the carrier-wave frequency) after traveling a distance of 1 ly. Although this rate of signal decay is much less than that of an equivalent EM signal in normal space, interstellar transmissions still necessitated power in the multigigawatt range and 100-m-diameter parabolic antennas coated with milanium cortenide, which reflects subspace waves. Another limitation of early 22nd century subspace technology was that the subspace modulators did not function at frequencies greater than 1 GHz owing to material imperfections of the Vulcanium antenna coils. Moreover, only 2% of the input power was actually transmitted into subspace: 62% was converted to heat and the remaining 36% "resurfaced," meaning it was transmitted as an EM signal in normal space and lost. Typical of these early transmitters was Polyphemus, the Sol system's largest, which filled a small crater on the Moon's far side and required ten dedicated fusion reactors to run at full capacity for 1 hour to send a single 1-gigabyte message packet to Alpha Centauri.

Although fabrication technologies and signal processing continued to be refined though the mid-22nd century, installing subspace radio transmitters on ships remained impractical. In 2146, a Bison-class cargo ship, UES Baikal (ACS-1), was modified to carry a short-range subspace communication system and a 120-m-diameter antenna. This ship was intended to serve as a mobile command platform supporting United Earth Space Probe Agency operations, but the transmitter consumed so much power that it and the ship's propulsion system could not be engaged at the same time. By the start of the Earth-Romulan War in 2156, subspace transmitters had decreased enough in size and power requirements to allow them to be carried aboard some United Earth Stellar Navy (UESN) ships, usually based on the Bison hull. However, these transmitters were still so large (20,000 m^3) and required so much power that these ships could have no functions other than subspace signal transmission and long-range scanning. Usually, one or two transmitter ships accompanied each task force as the UESN began its invasion of Romulan space in the final years of the war. Transmitter ships also operated in hunter/killer teams with Powhatan light cruisers in advance of task forces to find and destroy Romulan ships. Although communications were by no means instantaneous, timely command and control could still be maintained between task forces and bases in UESN-controlled space. The treaty ending the war in 2160 was actually negotiated and "signed" via subspace radio without a face-to-face meeting between Humans and Romulans.

For the next 30 years, transmitters could be installed on only the largest ships and to the detriment of other ship's functions. Therefore, most Starfleet cruisers on patrol or on deep-space exploratory missions still had to rely on warp message torpedoes for reporting back to their command bases. Ships could receive subspace messages, but could not send them. They could, of course, send simple radio messages, but this centuries-old technology was limited to the speed of light and, with the long-range missions of Daedalus, Wasp, and Moskva-class cruisers, might take 100 years or more to reach the nearest base. Even with torpedoes, some of which could travel several tens of light-years at wf 6 or better, real-time communication was impossible.

In 2185, the transtator was developed by Daniela Vukovic and Mareechi Govindarajan at Earth's University of Mumbai. This breakthrough allowed both the modulation of a normal-space signal with a high-frequency subspace wave and the necessary amplification. Like warp coils in starship drives, transtator-based modulators use verterium cortenide to generate the subspace wave. Advances in purification and crystal-growth technologies decreased the impurity/defect concentration to less than 10^5/cm^3, which enabled carrier wave frequencies in the gigahertz range with an efficiency exceeding 30%. In the meantime, the efficiency of milanium cortenide had been optimized to 5%. The basic transtator technology is still being used aboard all Federation starships in the 24th century. Efficiency has been further increased, and usual bandwidths are now in the terahertz range.

Service History
By the mid-2190s, transtator-based subspace transmitters had been become small enough to be installed in Starfleet vessels other than specialized communications ships. The first ships to carry the new compact transmitters were the Hyperion-class cruisers (NCC-851 to NCC-875), launched in 2194. The Hyperion class had been intended simply as a exploratory follow-up to the Moskva-class cruisers, which had been launched in 2179. However, when the Mercury subspace communication and sensor system became ready for service, Hyperion was seen as an ideal platform. Mercury was mounted in a special electromagnetically shielded housing on the ventral primary hull. Because of the transmitter's still-large power demands, a dedicated fusion reactor and deuterium supply were required.

Hyperion's structure and equipment were otherwise generally similar to those of the Moskva class, as only incremental improvements had been made in other ship's systems. In particular, the warp core could still not be ejected, and then-current understanding of subspace field dynamics still allowed a nonstreamlined hull configuration. However, the primary hull had become a flatter biconvex disc that was raised higher above the longitudinal axis of the secondary hull. The warp drive system comprised the SSWR-V-C matter/antimatter (M/AM) reactor powering two Griffon 3 warp nacelles. 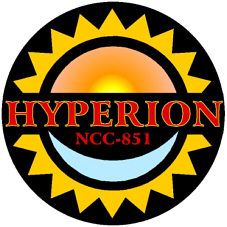 A dividend of the long-range subspace sensor was higher starship speeds. Earlier ships were limited to speeds less than wf 5 in part because their short-range navigational sensors gave at most a few seconds' warning to avoid objects in their paths. Subspace sensors reached several light minutes to light hours ahead of a ship so that speeds as great as wf 9 could theoretically be safely maintained. (Starship drive systems, however, would not actually be able to achieve such speeds for another 60 years.) 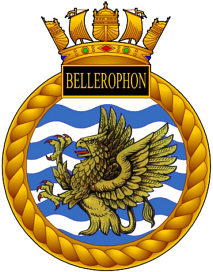 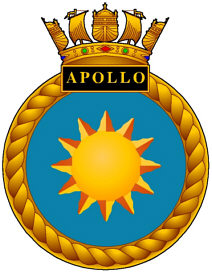 Because they were the first nonspecialized cruisers to carry subspace transmitters and sensors, ships of the Hyperion class served Starfleet in a wide range of roles, including long-range explorers, command ships, border-patrol ships, and escort/sentries. Several ships also served with civilian agencies, such as the Planetary Survey Division of the UFP Institute of Science. However, Hyperion cruisers were relatively lightly armed and rarely served as front-line combat vessels. The last Hyperion-class ship was retired in 2229.

Perhaps the most famous ship of the Hyperion class was USS Triton (NCC-866), which was the first Starfleet vessel to make contact with the Klingon Empire. Independent Human traders operating antispinward of the Donatu system approached the sector Starfleet commander at Starstation McCall with complaints that all attempts to establish trade relations with a race they called the "Clingans" had been forcefully rebuffed. They requested that Starfleet "encourage" this race, with force if necessary, to accept diplomatic and commercial relations with the Federation. As modern first-contact protocols had not yet been introduced, Triton's captain, Natalia Thibodeaux, decided to beam herself and a diplomatic first-contact team into the Great Hall on Qo'noS on October 11, 2218. Unfortunately, the Klingons had assembled in the Great Hall to celebrate their "expulsion" of the H'urq 11 centuries earlier and killed 7 members of the first-contact team. Thibodeaux and 13 members of the team managed to beam back safely, but USS Triton was severely damaged and nearly brought out of orbit by Klingon attacks. A total of 32 crew members were killed. By the time Triton limped back to Starstation McCall, the Federation was on the verge of war with the Klingon Empire.

USS Pacatrix (NCC-872), a block 2 Hyperion-class cruiser which saw extensive service as a long-range explorer both inside and outside Federation space, is on display at the Starfleet Museum.