Following the end of the Romulan War, the United Federation of Planets (UFP) engaged in more than 50 years of frenzied exploration and expansion. However, after contact was made with the Klingon Empire in 2218, many members of the Federation Council felt that the frontier was effectively closed, at least in the Beta Quadrant. (Although some rabid imperialists in Starfleet advocated invasion of Klingon space and drew up detailed contingency plans, this course of action was never considered by either Starfleet Command or the Federation Council.) Furthermore, critics of further exploration asked why new territory should be explored when known space had not yet been completely colonized. Indeed, many colonies established in the years immediately after the Romulan War still required generous financial and material support to remain viable.

By 2220, many influential council members believed that expansion had been too far and too fast. Starfleet, too, recognized that the present borders could not be adequately defended without a substantially increased investment in new starbases and starships. Accordingly, the consensus was that further expansion of the borders of the Federation was unnecessary and, perhaps, dangerous. Therefore, instead of advocating further expansion, the Federation Council proposed in March 2220 that the non-self-sustaining, outermost worlds be "decolonized" (i.e., abandoned) so that a smaller, stronger defensive perimeter could be established around core colony systems.

This reassessment of colonial policy led to a change in Starfleet doctrine. A Starfleet Command Directive in 2221 called for the development of light cruisers, destroyers, and scouts that were to be maintained at or near preexisting colonies along borders with potentially hostile powers. These ships would be sufficient to successfully repel border raids or a reconnaissance in force. Although such minor incursions could be expected to occur periodically, a large-scale invasion of Federation territory was considered unlikely given the ongoing political turmoil in the Klingon Empire, and the continued isolation of the Romulan Empire. However, if any indication of such an invasion were to be received by Starfleet Intelligence, advanced warning would probably be sufficient to allow redeployment of Federation forces opposite the expected point of attack. In the unlikely event of an attack of which no warning had been received, Federation border forces would be capable of slowing its advance until relieved or reinforced by a more powerful, centrally based task force that included heavy cruisers and dreadnoughts.

Although this policy might conceivably result in the destruction of colonies in the most outlying systems, it was the only defensive strategy that was feasible given the still-large border areas and the unwillingness of the Federation Council to provide unlimited funds for the defense of unprofitable colonies.

The Lancaster class (NCC-1209 to NCC-1258), which had entered service in 2205, had proven to be powerful and trustworthy starships; however, they had also been enormously expensive in terms of construction, maintenance, and manpower. While the decision to proceed with Lancaster had undoubtedly been correct in 2201, Starfleet began to feel in the 2220s that faster, lighter, and, above all, less costly starships were needed. In accordance with the high continuing cost of colonial support, a strict, fiscally more responsible starship procurement policy was instituted in 2221 by Fleet Admiral Charlotte Goldberg-Liu. However, now that new technologies—subspace radio, phasers, photon torpedoes, and transporters—first installed in the Lancaster class had proven their reliability, older back-up systems could be safely omitted from any following class. The new ships would presumably be smaller and less costly to build, maintain, and crew. These projected savings would, Starfleet hoped, allow more ships to be purchased at a lower unit cost.

Therefore, the new class was not intended to introduce technologies that had not already been proven aboard other classes. Instead, the new ships were to incorporate the engineering experience of the past 30 years to produce a relatively austere, yet capable starship that could be built in large numbers. In other words, the design was to be evolutionary rather than revolutionary.

In April 2223, the Starfleet Ships Specifications Review Board made public requirements for the new cruiser class of a projected 50 units. The ships of the Valley Forge class were to be delivered at a unit cost, adjusted for inflation, 15% below that of the Lancaster class. This reduction was to be achieved with higher degrees of automation, decreased size and weight, and a smaller radius of operation. However, other performance specifications, such as maximum speed, maneuverability at impulse and warp, shield strength, and firepower were to be 10% to 25% superior to those of Lancaster. 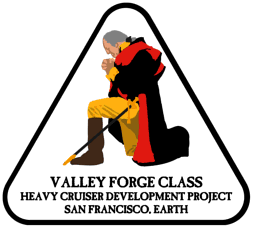 These new specifications were a victory for the "Light Cruiser Committee," a loose organization of Starfleet officers and engineers who felt that starships were becoming too large and ungainly to serve as effective fighting ships. They felt that if starships continued to increase in size at the current rate, the only tactic available would be to attack targets head on with guns blazing. The Light Cruiser Committee recognized that over time, starships, like any other complex system, tend toward growth and expansion as new mission requirements are added and greater performance is sought. In the 60 years since the launching of the Daedalus class, capital ship displacement had increased nearly 600%. The lower tonnage of the Valley Forge class compared with that of the Lancaster class halted, albeit temporarily, this trend towards gigantism. However, after Valley Forge, the growth in starship tonnage resumed such that the USS Galaxy (NCC-70637) of 2356, at nearly 5 million tons, is 2500% heavier than USS Constitution (NCC-1700) of a century earlier.

Unlike preceding cruiser classes, Valley Forge was not the result of a design competition. Because of the numerous irregularities that had marred the Lancaster competition of 2203, Starfleet announced in 2206 that henceforth the design and construction of all military vessels were to be "Federalized." Instead of Starfleet issuing a set of design specifications and inviting submissions from private firms, all design work and construction was to be concentrated at soon-to be expanded Starfleet yards, the first of which was to be in geosynchronous orbit above San Francisco, Earth. Therefore, by the time work began on Valley Forge, several classes of smaller vessels had already been produced at Starfleet Yards throughout the Federation. The lead ship of the new class, USS Valley Forge, was launched in November 2226 and joined the fleet in August 2227. 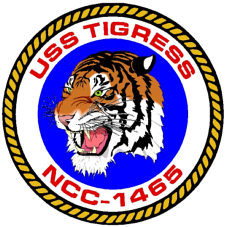 Visually, the slim, refined lines of the Valley Forge class were a distinct change from the massive, blocky silhouette of the Lancaster class. However, the basic starship layout that had been established by the Daedalus class of 2160 was continued. Furthermore, the follow-on Constitution class of 2245 was so similar in appearance to the Valley Forge class that when the USS Constitution first entered service, she was compared to a "Valley Forge on steroids."

Although the Valley Forge class was not intended to break any new ground in terms of design or technology, it did introduce several now-standard features. Valley Forge ships were equipped at launch with a "modern" battery limited to phasers and photon torpedoes. Neither lasers nor fusion weapons were carried. Because the man-rated transporters had become the principal means of ship-to-shore and ship-to-ship personnel travel, the ship's complement of shuttlecraft was reduced. Furthermore, fighter/attack craft and landing craft were now carried only by dedicated shuttlecarriers and assault transports. Valley Forge ships were the first to have a completely separable primary hull that was capable of independent action, although this capability was never used. Compact, spherical fusion reactor chambers were used instead of the cuboid reactors that had been standard in earlier classes. Finally, Valley Forge ships were the first to have duotronic computer systems installed in 2243. 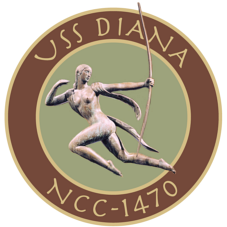 Soon after the first units of the Valley Forge class joined the fleet in 2227, border incursions by Klingon forces became more frequent. However, no major engagements were fought until January 20, 2244, when contact was lost with the Federation border monitor station on Beta Tetsuwan XII. Fourteen hours later, a squadron of 12 Klingon D6-class cruisers attacked the Federation colony on Cicatrix IV. They were engaged there by USS Cougar (NCC-1468) under the command of Captain Timsig Surrha which managed to disable two of the Klingon cruisers before destroying a third and herself by ramming the enemy vessel. Nearly all 1,000 inhabitants of the colony were killed by a ferocious orbital barrage. On January 22, the Klingons were intercepted near the fifth planet of the Donatu system by a task force of 10 ships led by Commodore Ibrahim Proulx of USS St. Petersburg (NCC-1467). Although the Klingons were forced to withdraw after the destruction of 6 more of their vessels, USS Dallas (NCC-1496) and the Siegfried-class dreadnought USS Sampson (NCC-1603) were destroyed and USS Franz Joseph (NCC-1233, Lancaster class), USS Proteus (NCC-1478), and USS Lysander (NCC-1592, Siegfried class) were damaged. In 2250, several Valley Forge ships (notably USS LaFayette under Captain J. Robert Fitzpatrick and USS Tokyo under Captain Jonas Barstow) saw action with Garth of Izar at the Battle of Axanar; however, most vessels were newer Constitution heavy cruisers and Siegfried dreadnoughts. 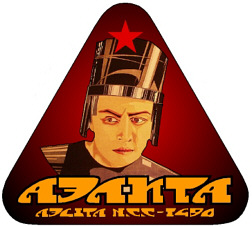 The perceived significance of the fleet actions of the 2240s and early 2250s along the Klingon border depended on whose opinion was sought. Some defense analysts and Starfleet officers saw the attacks as warnings of a future large-scale invasion and called for increased numbers of ships along the border. Some even went as far as advocating preemptive Federation attacks upon Klingon Imperial Fleet staging areas to prevent further invasions. However, other analysts saw the successful repelling of the attacks as a vindication of the current defense policy. Although they admitted the destruction of the Cicatrix IV colony was "regrettable," they considered the total number of Federation lives lost to be "modest and acceptable." To these analysts, the risk of death by alien invasion was just another of the many hardships of outer-colony life. These latter voices prevailed, and significant efforts to strengthen border forces were not made until Klingon border raids increased again in the mid-2250s, when the Avenger- and Predator-class destroyers joined the fleet. 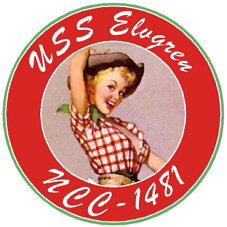 In addition to defending the Federation against external threats, Valley Forge ships were also active in maintaining order within the Federation. Should disagreements between member planets or colonies threaten to become violent, Starfleet vessels were called upon to separate the parties while Federation mediators attempted a diplomatic solution. In 2239, open hostilities over mining rights broke out between Human colonies on the fifth and sixth planets of the Ptomaine system. The planets had been colonized by rival corporations, which now sought to exploit the mineral wealth of the asteroid belt separating the planets. USS Aelita (NCC-1480) was forced to destroy several armed transports of the Pandora Corporation when they refused to break off an attack on an asteroid processing facility owned by the Grimaldi/Shasta Group. 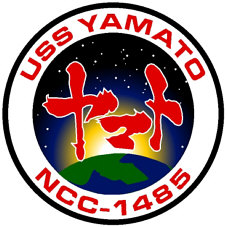 Valley Forge ships were also involved in numerous "police actions." In 2256, USS Diana (NCC-1470), USS Boxer (NCC-1498), and USS Dolphin (NCC-1504) spent eight months escorting convoys and hunting down Orion pirates that had been preying upon interstellar commerce near the Elbow of Böotes. The quick, maneuverable ships of the Valley Forge class were better suited for these types of missions than were Lancasters, which had been designed to engage other capital ships.

After significant numbers of ships of the more powerful Constitution, Pyotr Velikiy, and related classes began to join the fleet in the mid-2240s and early 2250s, the Valley Forge class was largely relegated to the traditional roles played by escorts and destroyers. However, with upgrades and refits Valley Forge ships continued to provide valuable service until their retirement in the 2280s. Moreover, the Valley Forge class, with the addition of two decks to the primary hull and a lengthened secondary hull, served as the basis for the Belleau Wood-class assault transports (NCC-1547, launched 2232), the Al-Burak-class fighter carriers (NCC-1520, launched 2232), and the Siegfried class dreadnoughts (NCC-1589, launched 2235).

The Valley Forge-class heavy cruiser USS Rattlesnake (NCC-1493), a participant of the Battle of Donatu V, is on display at the Starfleet Museum.